In the Book of Revelation we read,

God’s temple in heaven was opened,
and the ark of his covenant could be seen in the temple.

Allow me to show you what the Jews and the Early Church understood up until that time as the Ark of The Covenant.

I invite you to come up after Mass to view it.  According to the Book of Exodus, God told Moses to make the Ark of the Covenant.  He told him precisely how to make it and with which materials, including wrapping it in gold.  Depending upon what measurement you give to a “cubit”, the Ark of the Covenant was approximately four feet long, and about two and a half feet wide and two and a half feet high.  On the lid were two gold statues of cherubim as God’s throne, the “Seat of Mercy”.  The Ark was to be carried on two long poles placed through four rings on the box, two rings on each side. 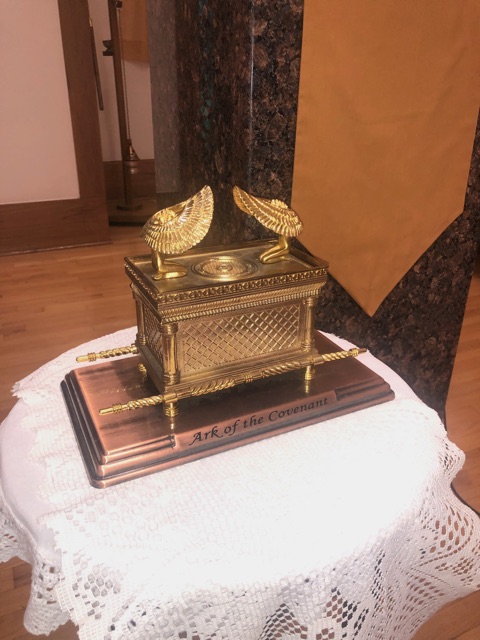 Ark of the Covenant – replica

Inside the Ark, scripture says were placed the stone tablets of the Ten Commandments, Aaron’s staff and a bowl of Manna, the Bread from Heaven.  The Ark of the Covenant disappeared when Babylon invaded Jerusalem.  Some say one of the prophets hid it in a cave.

Those who divided the Bible into numbered chapters and verses may confuse us from time to time.  Remember, that the original authors of scripture did not divide their writings into numbers of the chapters and verses.  That numbering system came later, over centuries later.  If we read the scripture from Revelations without the verse numbers, here is what we hear:

God’s temple in heaven was opened,
and the ark of his covenant could be seen in the temple.

A great sign appeared in the sky, a woman clothed with the sun, with the moon under her feet,
and on her head a crown of twelve stars.
She was with child ….

The Fathers of the early Church understood the symbols St. John was using.  Mary is the “real” Tabernacle.  Mary carried God in her womb.  Mary was the Ark of the Covenant.

John was with Mary at the foot of the Cross when Jesus was crucified, and had a special relationship with her.

Standing by the cross of Jesus were his mother and his mother’s sister, Mary the wife of Clopas, and Mary of Magdala.

When Jesus saw his mother and the disciple there whom he loved, he said to his mother, “Woman, behold, your son.”

Then he said to the disciple, “Behold, your mother.” And from that hour the disciple took her into his home.

John knew Mary well.  When John went to live in Ephesus he took Mary with him.  The island of Patmos is near Ephesus in what is now eastern Turkey.  Patmos was an island prison for dangerous criminals  That was where St. John wrote the Book of Revelation, from prison.

God gave to Moses the exact specifications for the Ark of the Covenant to house the most holy items of our faith, in the Old Testament.  That Ark disappeared centuries prior to Jesus’ birth.

Mary was born immaculate.  Mary could not die.  She is in heaven with her Son and God the Father.  Mary was “assumed” into heaven by her son.

If we believe in the Resurrection, then we must believe that Mary was one of the first to go to Heaven.  Mary is held up by the Church as our model and example.  With Mary, we believe in her son, Jesus.  We revere Mary, assumed into Heaven, and follow her to Jesus.

“Hail Mary, full of Grace, the Lord is with thee.

Blessed art though among women

And blessed is the fruit of your womb, Jesus.

Pray for us sinners, now and at the hour of our death.