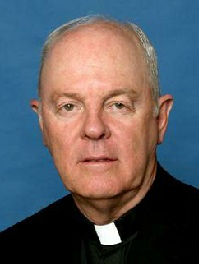 Father Mark Hamlet was ordained to the Priesthood in May 2010. Previously he was a permanent deacon for the Diocese of Austin, Texas and served St. John Neumann parish in Austin from 1995 to 2004. He transferred to Giddings in 2004 to serve St. Margaret’s Parish. Mark and his wife, Cynthia, met at the University of Dallas where they were students. They both converted to Catholicism as young adults. As students they a shared a love for mission work in Mexico. He earned his BA and MBA at UD.

Mark’s career in the medical device industry took him and his family to Arkansas, to live in Latin America for five years in Venezuela and Mexico, and later, to the Boston area. Mark, Cynthia and their six children moved to Austin in 1988 to pursue his management career in international and domestic marketing, sales and business development.

Cynthia passed away early in 2007, after losing her struggle with cancer. In the Fall of 2008, Deacon Mark was accepted as a seminarian for the Diocese of Austin. After ordination to the priesthood, he was assigned to St. John the Evangelist Parish in San Marcos. In July 2012 he was assigned as Pastor at Sacred Heart Catholic Church in Austin. He served on the Board of Directors for Catholic Charities, and the Diocesan School Advisory Board.

Fr. Mark founded “Our Kids at Heart”, a non-profit corporation to help under-privileged families send their children to Catholic schools. By 2018 there were over 150 parish children, mostly children of immigrant families, enrolled in this program and attending area Catholic schools, Pre-K to 12th grade.

Stewardship has also been a focus of Fr. Mark’s ministry, and he has presented the experiences of his parish of Sacred Heart to national and international audiences.

When Fr. Mark is not serving the church or enjoying his family and grandchildren, he travels and enjoys ocean sailing as a charter skipper.