In St. Mark’s account of Jesus’ Ascension into heaven, we hear his directive to his followers,

“Go into the whole world
and proclaim the gospel to every creature.
Whoever believes and is baptized will be saved;
whoever does not believe will be condemned.”

In Acts we heard,

you will receive power when the Holy Spirit comes upon you, and you will be my witnesses in Jerusalem,
throughout Judea and Samaria, and to the ends of the earth.”

The Church burst forth from Palestine, led by the Apostles, and they entered into a surprisingly religious world. Many people are religious and want to believe in God, but don’t know him, and certainly did not yet know that Jesus Christ was God. 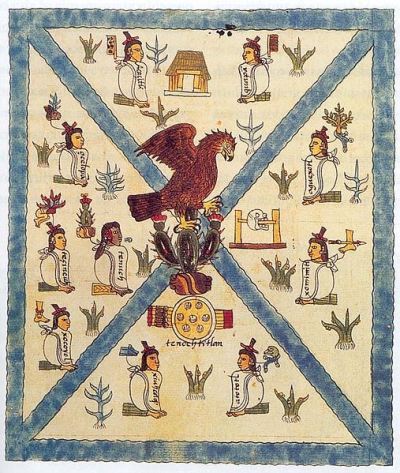 Something similar happened 500 years ago in Mexico after the Spanish Conquistadors entered and the priests followed. They arrived in Mexico in 1519, and conquered the Capital of Mexico in 1521. At first, the Spanish conquistadors and the early missionary priests misunderstood the faith of the people whom they encountered in Mexico. They found many pagan religious practices, including strange idols and large numbers of human sacrifices every year. During the first ten years of the conquest, the early missionary priests believed they were facing a polytheistic, pagan, devil-worshiping people. After ten years of hard work, they had only a handful of converts to Christianity among the ten million estimated Mexican peoples they found. Even at this time there were still an estimated 10,000 human sacrifices every year in and around Mexico City.

By this time, in 1531, the Mexican peoples were devastated and culturally depressed due to the Spanish military conquest, the loss of their royal leaders and government, their priests and their places of worship. They found themselves now a people subject to a foreign king who wanted to impose a foreign religion upon them. They had lost everything their fathers had taught them to be true. A deep, cultural melancholy took root among the Mexican peoples. By 1531, they found themselves treated like slaves, children, a devil-worshiping people who needed to be cleansed of their evil ways.

Into this sad history entered Blessed Virgin Mary when she appeared to San Juan Diego at Tepeyac in December 1531.

We make a mistake when we think of that moment as simply a miraculous appearance, or her image only a sacred picture from the 16th century. It was much more than that. Mary’s appearance was, and still is ongoing evangelization. The image of Our Lady of Guadalupe is a “gospel”. 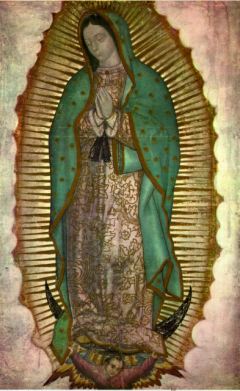 Our Lady of Guadalupe

You know you are reading the original when you see the “imprimatur” of the Archbishop of Mexico in the lower right corner of the image. Everything else is simply an artist’s version of the original. The artist reproductions currently in our parish were created in studios fairly recently. The original image of Our Lady of Guadalupe came from heaven, through the Holy Spirit some 500 years ago.

In the original image Mary shows she understood these people, that they were not “polytheists”, but monotheists. The Aztec peoples believed that there was only one God. However, different tribes had different symbols for the one God. The largest group believed God was the Sun. The next largest group included tribes that believed God was best symbolized by the Moon. Others believed that God was best symbolized by stars of heaven or even various flowers which represented the sun, or fertility.

These Aztec people were civilized and advanced in many ways. Their math and learning was sophisticated. However, this people were culturally very different from the newly arrived Europeans. Their language was not phonetic, and did not use letters or any phonetic alphabet. The Nahuatl language was more like the Egyptians or the Chinese, utilizing pictographs, images and symbols. The image of Our Lady is a “pictograph” message the people would have understood. It is important for us to read her message from the original document, not from some abstraction or artistic interpretation.

Mary started by affirming their faith and belief in God, by telling them she understood that they were very religious people. She appeared to them humbly, not as a queen or a goddess, but a humble woman; a woman at prayer. In the image we see that she told them that she knew they believed in the one God. But, she told them, “He is not the sun. He is not the moon. He is not the stars or the flowers.” The original image is on San Juan Diego’s tilma, or “poncho”, and still hangs in the Basilica of Guadalupe in Mexico City. The archbishop’s imprimatur appearing in the lower right corner of the image assures that our new image is an exact replica of the original.

At the end of the Gospel of Mark,

Jesus said to his disciples:
“Go into the whole world
and proclaim the gospel to every creature.

Mary proclaims the Gospel. She bore God in her body. She showed them she was pregnant. She wears the belt of pregnancy that they would have recognized. Her hands are held up in prayer over her swollen belly and over her belt, like a protection for her child. She told Juan Diego in his Nahuatl language that she is the Mother of God.

Further, it is obvious from the image that our God is human, not the moon or the sun, but the son of a human mother, Mary.

She anticipates that the Spirit of the Mexican people will accept her, and we see the “angel” under her feet, embracing her gown and cloak, revealing her foot standing on the moon. The Aztecs would not have recognized the angel images depicted by European artists. This is not a heavenly cherubim or baby with dove wings.

In her words spoken in Nahuatl, the language of the Aztecs, she told Juan Diego,

“Know, know for sure, my dearest, littlest and youngest son, that I am the perfect and ever Virgin Holy Mary, Mother of the God of truth through Whom everything lives, the Lord of all things near us, the Lord of heaven and earth.”

Mary was correct. These were a very religious people. But it is not enough to believe in God. Mary brought them to Jesus. The effect of her love letter to them in the image and appearances was a flood of Baptisms. Within five years some five million people had been baptized; and some nine million by the death of Juan Diego and Bishop Zumarraga in 1548. One Spanish priest wrote in 1536 that he and his partner recorded over 14,000 baptisms in Mexico in just five days. The number of Baptisms in Mexico was so great that even Pope Paul III became concerned about priests shortening the baptism liturgy and catechism, and he issued a Papal Bull about his concerns.

The people had lost their primary temples, as the Spanish tore them down and built a churches on those sites. They needed places to worship. Mary sent Juan Diego to the Bishop asking for a Church to be built on the site of her appearance. For the Spanish and the bishop, Mary appealed to their European sense of scripture from the Book of Revelation, where we read,

A great sign appeared in the sky, a woman* clothed with the sun, with the moon under her feet, and on her head a crown of twelve stars…, She was with child….

There is much, much more to this mysterious miracle. I can only scratch the surface of the messages and mysteries of the Tilma. But the miracle is not just the image. The greater miracle involves the evangelization and the unimaginable number of conversions and baptisms. Mary is showing us how to evangelize by listening first. And she corrected the misunderstanding of the Spanish priests, and affirmed that these were very religious people who believed in one God. Mary led them to her son, Jesus Christ. Evangelization consists in telling people about Jesus.

The original image of Our Lady of Guadalupe is a living, ongoing evangelization. Even in our time some 14 million pilgrims go to the Basilica of Guadalupe in Mexico City. This is more than from all the other Marian shrines on planet earth, including Lourdes and Fatima.